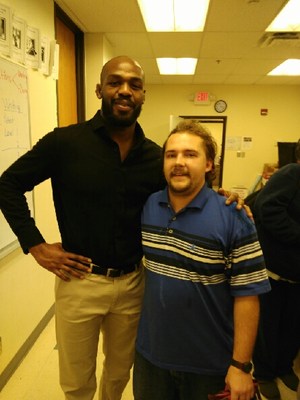 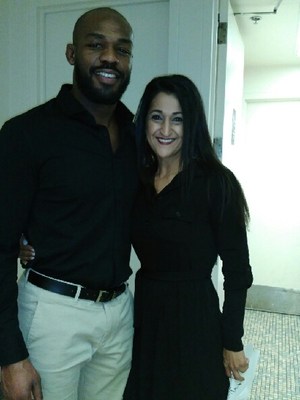 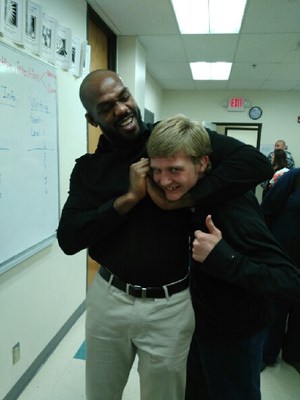 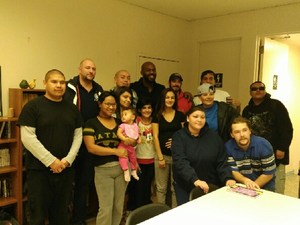 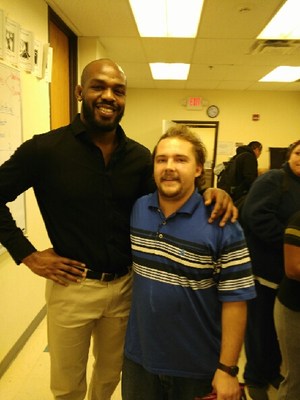 These were just a few of the reactions students had when the No. 1 pound-for-pound fighter, former UFC champion Jon “Bones” Jones showed up to present at Gordon Bernell Charter School’s Roma campus on Jan. 20.

It was standing room only when both students and staff packed into a classroom to listen to Jones’ straightforward message on overcoming life’s adversities. His message to the students was meaningful and relevant, as he and many of Gordon Bernell’s students share common backgrounds of hardships.

Jones repeatedly encouraged students to “Be your best self.” He shared personal examples of failures and triumphs throughout his life, but attributed his passion for wrestling to his high school wrestling coach. In 9th-grade, his coach encouraged him to join the wrestling team. Jones said he was surprised and caught off guard by this request, as no one had ever noticed him or praised him for anything positive.

“He was the first person who ever believed in me,” said Jones. Although Jones could not immediately participate in wrestling due to failing grades in all of his classes, the coach encouraged him to bring up his grades to at least Cs before allowing him to join the team, regardless of the wrestling season already being in session. For the first time, Jones felt as if he’d had a purpose and vision.

Bringing up his grades was quite the struggle--Jones realized that he could barely read. Nevertheless, he connected with his teachers, made up all of his missing assignments and got caught up in all of his classes. Jones admits that he never earned a grade higher than a “C” in school before, but that was enough for him, considering his weaknesses in reading. With passing “C” grades, Jones joined the team.

Jones was overwhelmed by the coach’s follow-through and continued belief in him as an athlete. Jones admits that his wrestling record in 9th and 10th grade was nothing to brag about, but that didn’t matter—all that mattered was that he was seeing progress, he had something to work for and that someone believed in him. This, he shared, was the beginning of his obsessive work ethic.

Jones strongly encouraged Gordon Bernell students to define their purpose, create their vision, and “get crazy” and “be obsessed” with whatever they aspire to achieve. After an hour of sharing his story, Jones concluded his message with these words of encouragement:

“Believe in something bigger than yourself—I'm living proof that dreams come true.“

After answering a few questions from students and staff, Jones took time to take pictures with students, signed autographs, signed backpacks, and whatever else students could find. Students were honored and in awe of his presence and couldn’t believe that Jon “Bones” Jones had graced the halls of Gordon Bernell Charter School